ATT is robbing me of minutes and money.  It takes a lot of MB to blog.  I now know that the next time we travel here (and there WILL be a next time) we’ll stay at at a place that has internet.  So, I last left you with the tales of Carcassone.  The next day we went to a place that has a hoodoos, similar to the ones found in Brice Canyon. 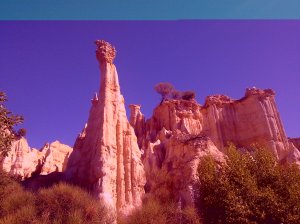 It was a nice hike and the sky was incredibly blue.  On the way there we got stuck in the middle of of this tiny village.  When I say stuck, I literally mean, the cars wouldn’t go any further and we couldn’t open the doors because the street was so narrow.  It was impossible to turn around however, we did try. My dad ended up scratching the door of the car in the attempt.  Even now, I am plagued with thoughts of how trapped I felt.  We then travelled to a small village to see what we thought was a cave.

When we arrived at the entrance of the “cave” it was closed for lunch.  I still find it interesting that many shops and attractions close from 12:30 to 2:30 or so.   We went for a long lunch instead which was lovely.  After lunch we realized that we were not at the entrance of a cave, but the largest oak vat in the world.  B ummer, we didn’t stay for that.  At that point our group spit into two.  Parents and Kendra went off on an adventure and I we went to Castlenou.

That's what she said